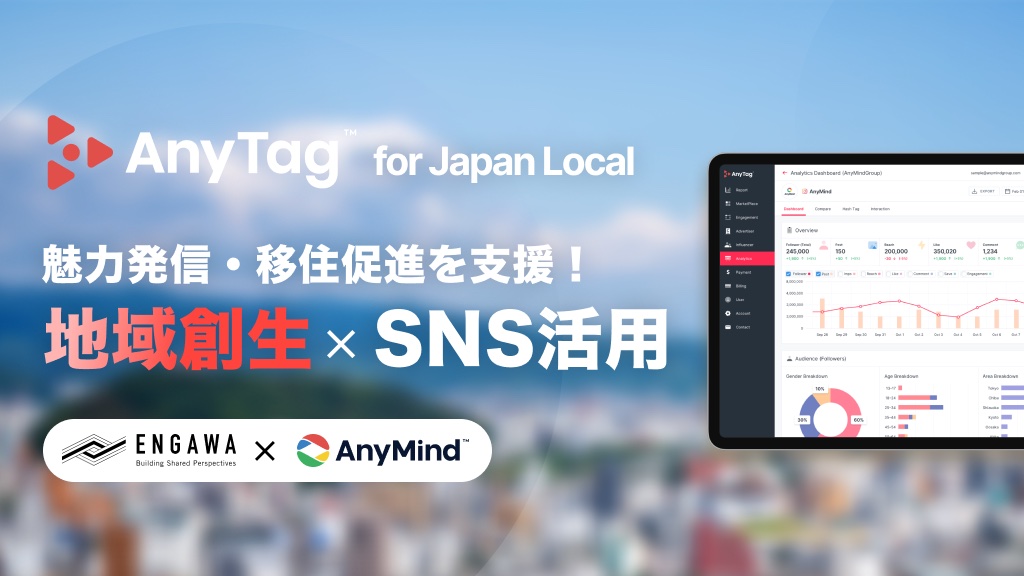 AnyMind Group, an end-to-end commerce enablement company, and its subsidiary, ENGAWA, have today announced the launch of AnyTag for Japan Local, a program to provide local businesses and government agencies throughout Japan with the ability to tap on AnyMind Group’s array of marketing platforms and the expertise of ENGAWA to promote Japanese local and regional attractions and immigration both domestically and internationally. Data from Japan’s Ministry of Internal Affairs and Communications showed that the effect of COVID-19 has caused an 80% decrease in an excess number of people moving into Tokyo in 2021 (the number of people moving in minus those moving out) compared to the previous year, and has been the lowest for two consecutive years since 2020. The number of people moving out of Tokyo increased by more than 10,000 from the previous year to over 410,000 as an accelerated outflow of population from urban and suburban areas to rural areas. As a result, the Yano Research Institute estimates that the size of the “workation” market will reach ¥90.9 billion in FY2022 and ¥362.2 billion in FY2025. Today, local Japanese businesses and government agencies are strengthening their efforts to promote regional development, including domestic migration. To support them, AnyMind Group’s subsidiary, ENGAWA, has collaborated with multiple bodies to support them in a range of promotional measures including the planning and management of events, the promotion of local products and the digitalization of local businesses. One such example is for Tottori Prefecture, where ENGAWA conducted a survey on foreigners to find out their opinions of Japan and the Tottori Prefecture. With findings from the survey, new attractions were discovered and sightseeing itineraries and tours were created and promoted through online means including influencer marketing. As a result, the tours developed achieved its target number of participants and successfully promoted the attractiveness of Tottori prefecture both domestically and internationally. On the other hand, AnyMind Group provides a wide array of platforms for cloud manufacturing, e-commerce enablement, marketing and logistics, including AnyTag, one of the leading influencer marketing platforms in Asia. By combining the strengths of AnyMind Group’s technology and ENGAWA’s cross-border marketing expertise, the AnyTag for Japan Local program will provide multi-dimensional support for planning, implementation and measurement. This includes: