AnyMind Group, an end-to-end commerce enablement platform for brands, influencers and publishers, together with UUUM, a Japan-based multi-channel network and a leader in creator management and content marketing, have announced that both companies have once again collaborated to launch the second product line of ARAKA. ARAKA is a direct-to-consumer (D2C) brand created by Tsuriyokadesyou, a creator exclusive to UUUM.

The latest product line comes in the form of two types of craft beer that were created exclusively for outdoor use, called ARAKA OUTDOOR BEER, and will go on sale at the ARAKA official online store on 16 October 2021 at 6 pm Japan Standard Time. Additionally, the latest lineup features a camping container that can be used to store beer, camping items or fishing gear.

As the second product in the ARAKA brand’s lineup, the ARAKA OUTDOOR BEER is a collaboration with Munemasa Shuzo, which brews Japanese sake and shochu in Arita-machi, Saga prefecture in Japan.

The product was planned against the backdrop of growing demand for such beverages due to an increasing popularity in outdoor activities and changes in social conditions in recent years. To give shape to Tsuriyokadesyou’s passions and ideas, UUUM’s P2C Studio and AnyMind Group, through tools such as AnyFactory, AnyShop and AnyLogi, were tapped on for comprehensive support for planning, design, production, e-commerce enablement and logistics, resulting in the launch of ARAKA OUTDOOR BEER.

A pale ale craft beer with a refreshing, fruity aroma and powerful bitterness. It is not too light and not too heavy, making it easy to drink for craft beer lovers. It is also a special outdoor craft beer that goes especially well with bold meat dishes, cheese, and other richly flavored dishes when camping.

A pilsner-style craft beer with a perfect balance between natural sweetness of beer and the bitterness of hops. Lemongrass, a herb found in Saga prefecture, is added as a special ingredient to give the pilsner a smooth and light feeling. The faint aroma of the herb not only increases appetite but also relaxes the person. It goes well with fish dishes that have little seasoning such as freshly caught and grilled fish or fresh sashimi. The herb effect eliminates fishy aftertaste and the aroma of the herb spreads softly with a refreshing aftertaste, making this craft beer the perfect brew for the outdoors.

The ARAKA CAMP CONTAINER is a redesigned version of a folding container used commonly in logistics and item deliveries, and is designed uniquely to fit into ARAKA’s worldview. It is a sturdy container to carry camping gear and small items such as fishing gear, and can be folded up for compact storage when not in use. The calm dark gray color makes it ideal not only for the outdoors, but also for everyday use in cars or as a storage box in the room.

The end-to-end product development process, including package design and sample production, is shown on Tsuriyokadesyou’s subchannel “Sagayokadeshou.” In addition, the ARAKA OUTDOOR BEER was manufactured in conjunction with a craft beer brewer, and the production process is shown in the video. Also, the thoughts of Tsuriyokadesyou’s members and craftsmanship of the brewers are also featured throughout the video.

We love camping, barbecues and eating outdoors, so we’re happy to release an outdoor beer that fits our love of outdoor dining and is perfect for us! We worked with a sake brewer to create two types of craft beer that can be easily paired with meat or fish dishes. In addition, we were able to create these beers from Saga, which makes us even happier as we are working to make our hometown even more exciting. In addition to the beer, the bottle opener and container are also designed to be functional for outdoor use. We hope that you will take them with you when you go out into the wilderness! 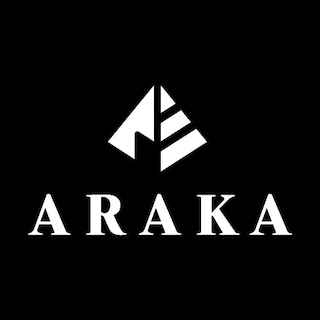 ARAKA is an outdoor brand that delivers experiences that make outdoor life in the great wilderness and urban life in the big city even more enjoyable, based on the concept of “making the great outdoors a playground.” The origin of the name “ARAKA” comes from a dialect of Saga prefecture, which means “Oh no!” and is a word that expresses surprise. It is our hope to become the world’s freest outdoor brand that delivers unprecedented experiences by creating original products from a unique perspective.