1. The importance of optimization to beat app competition

Currently there are more than 2 million mobile applications available in the app store. How can publishers make their applications easy to find? This is one of the issues that every new application has to deal with. It’s important to understand some of the methods of app marketing, and one of the most important techniques that many app developers often overlook is app store optimization (ASO). 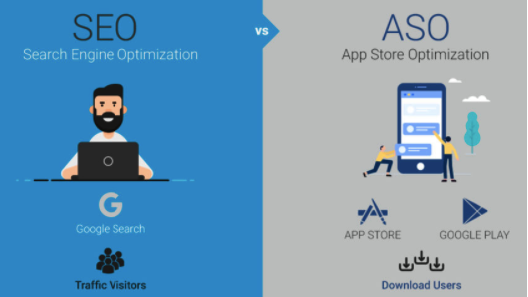 In general, the main purpose of using ASO is to drive a lot of traffic to your app page in the app store, so that the search will end up on the one action you want most as an app owner, which is downloading your app! -Ian Sefferman, CEO of MobileDevHQ –

The process of using ASO also requires a very important understanding based on the desired target consumer or user, including using ‘keywords’ that are often used by potential users to search and find applications that they are interested in. Not only that, but it’s also a good idea for publishers to understand the language of potential users. For example, if a publisher wants to target more universal users, it can use keywords in English. According to our research, 65% of installed apps are from app store searches. This percentage indicates that searching the app store is the most widely used method for finding and downloading the latest apps.

Factors within metadata (On-metadata factor) are factors that are directly under the control of application developers and can be easily modified from Google Play Console or App Store Connect.

3.2. Factors outside of metadata (Off-metadata factor)

Meanwhile, factors outside of metadata are factors that cannot be controlled, but can still be improved and optimized by application developers for the better.

Some quick tips to improve techniques that can affect ASO include the following:

– How to reflect what your app can do, which problems/issues/ needs it solve through ASO factors?

– How to reflect the benefits your app brings to users through ASO factors?

– Strategy: Refer to the successful Titles