The knives are made in Tsubame-Sanjo, Niigata Prefecture, and cutting board made in Japan using high-tech materials AnyMind Group, an end-to-end commerce enablement company, together with UUUM, a Japan-based multi-channel network and a leader in creator management and content marketing, have today announced that ARAKA, a direct-to-consumer outdoor brand produced through AnyMind Group’s D2C offerings and created by UUUM’s exclusive creator Tsuriyokadesyou, has launched its sixth product collection – a set of the highest quality kitchen knives made in Tsubame-Sanjo, Niigata Prefecture, and cutting boards made in Japan using high-tech wood and rubber materials. The new products will be available on the ARAKA official online store on 20 August 2022, 6:00 p.m. Japan Standard Time. The products were ideated by the members of Tsuriyokadesyou, who love to cook and wanted to make use of their cooking experiences to work with professional craftsmen to create the products. Giving shape to Tsuriyokadesyou’s idea, P2C Studio, a group company of UUUM, tapped on AnyMind Group’s platforms including AnyX, AnyFactory, AnyLogi and AnyChat, for planning, design, production, e-commerce, logistics and conversational commerce. The highest peak sharpness of hand-sharpened blades by the top craftsmen of Tsubame-Sanjo, Niigata Prefecture. The ARAKA KNIFE was produced in Sanjo, one of the leading cutlery production centers in Japan, together with Shimomura Kogyo Corporation, which has been running a blacksmith shop since 1874 (establishment). There are a maximum of 35 processes when crafting a knife, and craftsmen’s skills are utilized in each process. In particular, in the blade attachment process called “mizuto edging,” the blade is carefully attached to the blade while water is applied to the blade to create the “hamaguri-shape” cutting edge. This process, which directly affects the sharpness of the knife, is where the craftsman’s skills are most effective. The beautiful mirror finish of the sharp edge allows you to cut food with less force, and the sharpness lasts longer than knives with a normal blade attachment. ARAKA BOARD (Cutting board) 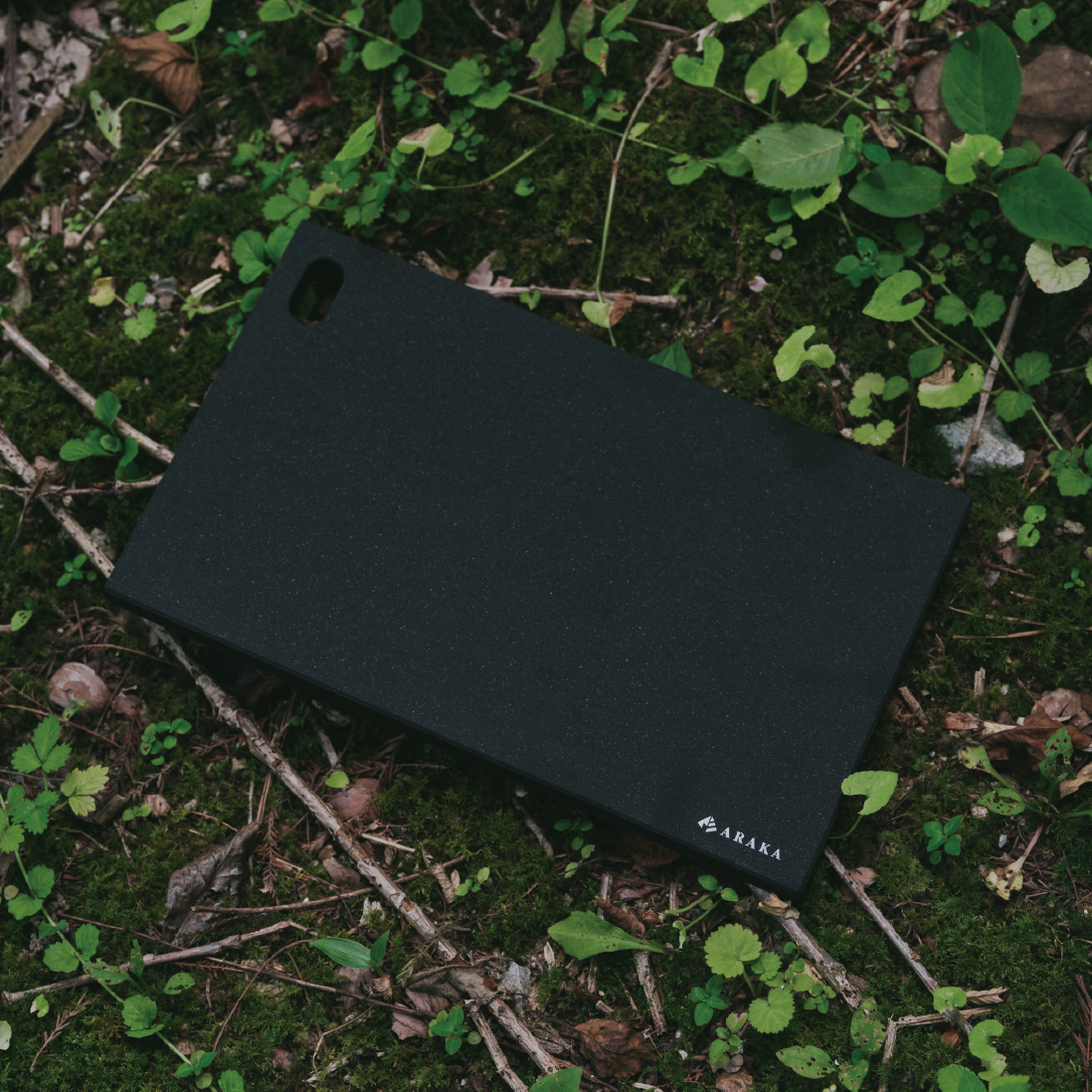 A cutting board for chefs, this top-of-line cutting board from Japan which has both a wood-like texture and scratch resistance. The ARAKA BOARD was developed together with Parker Asahi Corporation, which has been loved and used by many professional chefs since its launch in 1965. Using a hybrid material of wood and rubber, which is a wood-powder blended synthetic rubber, ARAKA has achieved a high level of both “good contact with the blade” similar to the texture of wood, and “scratch resistance,” “easy washing,” and “easy drying,” which are important for hygienic purposes, and the board can be used comfortably and cleanly for a long time. ARAKA 2WAY TABLE MAT (Table cover/table mat) The hidden star of this collection, this is a multifunctional mat that stylishly adds color to the outdoors. Available in six different colors, the ARAKA 2WAY TABLE MAT can be used as a cover when transporting cutting boards, knives and cutlery, but also used as a dining mat.

Available for purchase in a set or individually

ARAKA KNIFE&BOARD – Kitchen knife and cutting board set (without mat)